BEST OF 2017 OPINION: Subscribing to the notion that a change in belief will lead to a corresponding change in behaviour may seem like common sense, but Faris Yakob argues that marketers who want to do their job should look into how behaviour is actually shaped and changed.

"The person you are the most afraid to contradict is yourself." – Nassim Taleb

The model behind most advertising relies on a seemingly common-sense cognitive cascade. If a company can get access to an audience's attention, it can then attempt to persuade them, through rational and emotional messaging, to change their behaviour. This behaviour is usually at some point in the future – otherwise, all advertising would work like 'as seen on TV' direct response. Despite the much-used adage of 'right place, right person, right time', the vast majority of customers for any brand or product are not actively in the market at any given point and mass media is only efficient when speaking to mass markets. So the objective is to alter perceptions in order to change behaviour later, which is why we measure brand awareness and preference using surveys and seek to understand what about a product is most interesting or emotive to craft an appealing message.

This is the oldest model of advertising effect, namely AIDA (Attention, Interest, Decision, Action), and it is this cascade that creates the marketing funnel measurement framework. However, modern psychological insight suggests we might need to turn the funnel upside down. The common-sense notion that changing someone's beliefs will change their behaviour – or even that their actions are aligned to their beliefs – has been challenged for some time. People's beliefs are malleable, based on social influence, context, and, most importantly, their own behaviour.

We seek to minimise what is known as cognitive dissonance by aligning our thoughts and beliefs with the actions we have taken in order to maintain the illusion that we are holistic, when of course we often contradict ourselves because we are "large and contain multitudes" (Walt Whitman). Our conscious minds are full of conflicting thoughts and desires; it is only when we finally act that the superposition of consciousness resolves itself one way or another into the world. So, if you can directly influence actions, the perceptions will change themselves.

Since changing perceptions, associations and beliefs was only ever a means to the ultimate end of commercial behaviour change – getting more people 2017to buy more of something, more frequently, for more money – this model lets us refocus on the true task at hand. The most famous behaviour change model is that of BJ Fogg, founder of the Persuasive Tech Lab at Stanford University. He suggests that three elements must converge at the same time for a behaviour to occur: motivation, ability, and trigger. When a behaviour doesn't occur, one of the elements is missing.

Consumer psychologist and communication strategist Adam Ferrier uses this as the framework for the Action Advertising model in his excellent book The Advertising Effect: How to Change Behaviour. (It's a great title because it reminds us that the only thing that matters is the effect we create, not the content we make.)

The tendency of a desired behaviour to happen is a function of how motivated someone is, how easy it is, and contextual triggers. Thus, any communication should have clearly defined roles based on targeting the behaviour. You must either increase the ease, or the motivation, or create new triggers. If motivation is high but the behaviour isn't easy, ideas need to facilitate abilities or opportunities to act. If the action is easier but consumers aren't motivated, then ideas need to build individual or social incentives around the behaviour. The idea itself can also create intermediate behaviours to imitate, which was the core principle behind the classic BBH Lynx (Axe) advertising, which displayed mating behaviours to young men which they could imitate in the wild. One powerful intermediate behaviour to target is search volume. A modern, behavioural measure of brand equity is the proportion of traffic derived from branded rather than category searches.

Instead of exploring consumer beliefs to inform an idea, you should first identify the desired behaviour (and its drivers and barriers). You can then use one of the ten 'action spurs' in Adam's book to address that. Motivation strategies include brand utilities which help consumers achieve their own goals, and reframing ideas, which tap into existing behaviours and transpose them, such as when Baby Carrots rebranded as junk food.

The model is business- and behaviour-led, rather than worshipping at the altar of creative ideas, which turns the focus for agencies – and the AIDA model – upside down. So, to change behaviour, target behaviour. 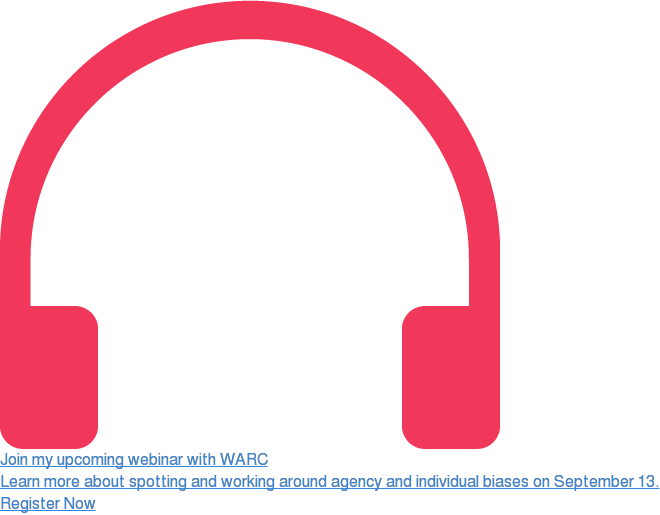